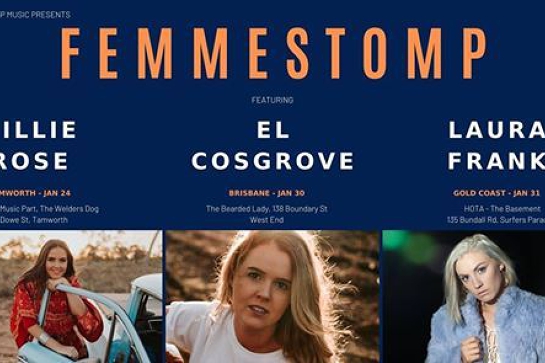 You can catch these musicians playing 3 special dates in January!

Hailing from the regional town of Charters Towers in Queensland’s North-West, singer-songwriter, Billie-Rose has the world at her feet. At only 18 years of age, the velvety voiced performer has smoothly blended the lines between country and pop ballad, to create her own niche sound. Billie-Rose’s music reveals a sincerity and depth well beyond her age that appeals to all. Her new single "Wrong Kid Of Right" is out now!

El Cosgrove developed a love and talent for songwriting while growing up and riding horses in regional Queensland on her family's farm in the Darling Downs, with her creativity flourishing while on her many travels between the Northern Territory to the Rocky Mountains of Canada. Music was always in El's blood, growing up surrounded by a musical family and developing her taste through regular family jams. Her new track "Honey" was recorded amongst the mountains in Bangalow with Producer Jordan Power, and encapsulates the feeling of home that was created by the many people she met along her wanderings.

Currently residing in South-east QLD on the farm she was raised, Laura Frank has achieved plenty in her short life. From yodelling champion in Year 5, to qualified tap dance teacher or former cafe owner and mixed martial arts gym operator, it would appear there is no glass ceiling for Frank who whilst recording her new single was also building her own home! Now, having found her true sound debuting in the Alt Country music scene, Laura Frank is set to release "Things I’d Rather Do", produced by ARIA Award & Golden Guitar winner, Jordan Power.