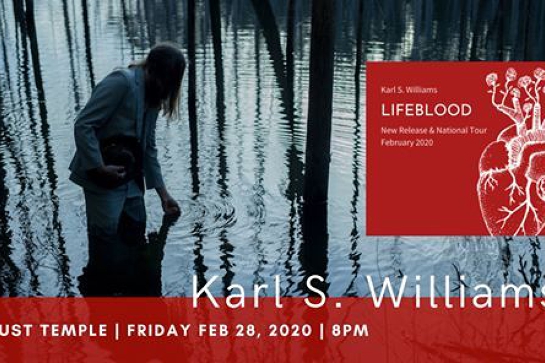 Karl S. Williams emerged from the cane country of Northern New South Wales, steeped in swamp water and primitive music. His songs are a distillation of life, love and the human condition; a kind of folk, soul, blues but not as you know it. With a weaponised voice that can soar, moan and ache with the best of them, he writes timeless music, rooted in tradition but also firmly conversant with the present. Whether solo or with his incandescent band, a Karl S. Williams show is frequently referred to as a spiritual experience - delivered with a visceral conviction that leaves audiences profoundly moved.

Karl built his reputation over many years playing around South East QLD before his debut album Heartwood was released in 2014 on Footstomp Music/WMA to widespread acclaim. He was recognised as artist of the year at the inaugural Gold Coast Music Awards in 2015 and took out a QMA in 2018 for the single 'Blood To Give'. He has toured extensively in Australia including festivals such as Bluesfest, Woodford Folk Festival, Dark Mofo, Panama, Queenscliff and Festival of The Sun and supported artists such as Donavon Frankenreiter, Mia Dyson, Tex Perkins, Don Walker and Busby Marou.

In 2020 Karl S. Williams will release his next offering, a pint of his lifeblood. An album of new material that replies with vitriol to the ills of our time while offering the ageless solution - love more.