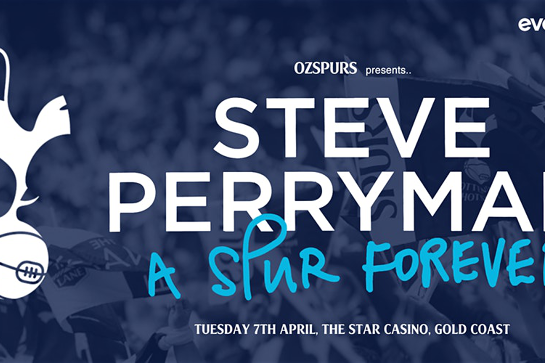 Doors Open: 1hr Prior To Event

Pre-Sale Tickets: From Feb 6th - 13th is only for OZSPURS members.

Tickets: From Feb 14th tickets go on sale to the general public.

It is rare in modern football that a player becomes synonymous with a club but through the 70s and 80s Steve Perryman was the heart and soul of Tottenham Hotspur. Loyal, loved by the fans and trusted by his managers and players the Spurs captain became the club’s record appearance maker and won two UEFA cups, two FA Cups and two League cups.

OzSpurs is delighted to announce that Steve Perryman will be doing 5 OzSpurs events across Australia in March and April this year, including the opening night of the 2020 OzSpurs National. The format will be a Q&A with Steve hosted by OzSpurs, and then a picture and signing session.

'A Spur Forever’ includes a foreword by Steve’s team-mate and fellow legend Glenn Hoddle. The book is printed in full colour over 304 pages – including over 150 photographs - and has a wealth of memorabilia from Steve's career.

- Record appearances for us in the league, FA Cup, League Cup and Europe